I’ve been thinking a lot about the wilderness lately.  I live in a wilderness, first of all; Eastern Oregon, other than some fairly nicely developed, habitable areas, is little more than a sagebrush-laden wasteland (Virtue Flats, anyone?) It’s through this wilderness that those hardy pioneers traveled while blazing what we now know, and somewhat revere, as the “Oregon Trail”.

I can imagine the excitement and joy those pioneers felt as they  egan their trek. Oh, the happy, joyful songs of anticipation they sang while leaving the East…but those songs soon turned into silence as feet got tired, food ran low, people got sick, and little rock mounds marked those who weren’t going to make it to their promised land, the West. No, eventually, the excitement of the journey became just a stalwart putting one foot in front of another, day in, day out, hoping against hope that “the West” would present itself soon.  I wonder if I’ll ever feel clean…or rested…or full…or hopeful…again.

But those weren’t the first pioneers.  The first pioneers I know of were the Israelites.  Miraculously delivered from Egypt in a blaze of drama and excitement and heart-stopping, neck-breaking motion (go read Exodus or, second best, watch The Ten Commandments), they saw, first-hand, the mighty power of God working on their behalf.  They would follow Him anywhere!  They would walk with Him through the wilderness to the Promised Land…

…they didn’t even make it 2 weeks before they grew disheartened (now, read Exodus; this part isn’t in the movie). Little did they know they would be sojourning in this loveliness for forty years.  The Promised Land, I’m sure, became little more than a fairy tale for their children to hang onto as they trudged, day after day, one foot in front of the other, wondering if they’d really heard what they thought they’d heard, seen what they thought they had seen, believed what they thought they believed.  I wonder if I’ll ever feel at home again…

It’s been cold this winter in Baker County…bitterly cold; the kind of cold that settles into your bones and doesn’t leave, no matter how many blankets you pile on top of yourself.  It’s the kind of cold that makes you want to stay in bed long past the alarm clock and crawl back into bed at 7:oo pm.  I think I rather wish I could sleep away the winter and wake up when the six feet of snow outside my house has yielded to some happy little tulips.  These snowy, grey, cold days just keep going though…and sometimes I wonder if I will ever feel warm again.

But it’s not just the cold that has gotten me feeling like that lately; it’s the silence. There have been times in my life when God has bent over backwards to show me His love, to make sure I hear His voice, to make His plan so plain that there’s no mistaking Him!  Those times are exciting and full of sparkling wonder. I wake up in the morning with songs of praise bursting out of my mouth, bounce through the day, and then go to bed with prayers and tears of gratitude overflowing.  It’s beautiful.  I love those times.

But these are not those times.  This time is the silent time.  The grey time.  The time when I simply have to trudge through the daily monotony of living without angels and visions and mind-blowing revelation. It’s at these times that I have to just keep putting one foot in front of another, trusting that God is God and His Word will stand.  He will keep His promises, regardless if I “feel” it from one day to the next.

But He does punctuate the silence…today’s tender mercy was a Scripture that popped out of nowhere onto my computer screen: 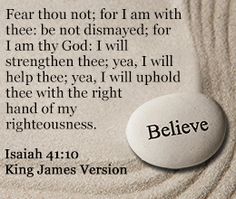 Right when I need it the most, He whispers. No great light show, no booming voice from heaven, no divine GPS or Google map to reassure me that, although the wilderness seems unending, I am going in the right direction.

Just a nudge. Just a whisper. Just enough Presence for me to know that I am not alone.

And the trudge is lightened, just a bit.

What a tender mercy!